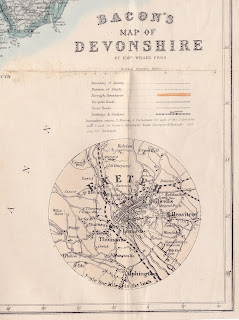 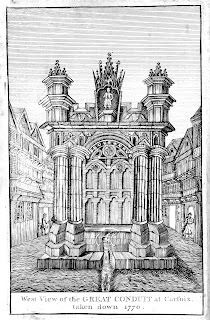 A Brief History of Exeter by Dick Passmore  The Great Conduit stood from 1441 - 1770 (Jenkins entry 17) A Brief History of Exeter   By Dick Passmore   EXETER, the county town of Devon, is one of the oldest cities in England, and able to boast of settlements prior to the Roman invasion of our country, possibly two hundred years before. Iron age settlements have been excavated recently in various areas of the city, although these settlements appear to have been small, possibly just farms, rather than the remains of anything larger. Certainly a Roman legionary fortress was set up in c.55 – 60 AD, lasting until c.75 AD. Recently evidence of further Roman military activity around Exeter has been found, possibly pre-dating the fortress by a few years – but archaeological work on this aspect continues, and at present has to be classed as possible, rather than definite. The early Roman civil town of Exeter was established around 80 AD on the site of the earlier fortress, and was enclose
Post a Comment
Read more
More posts